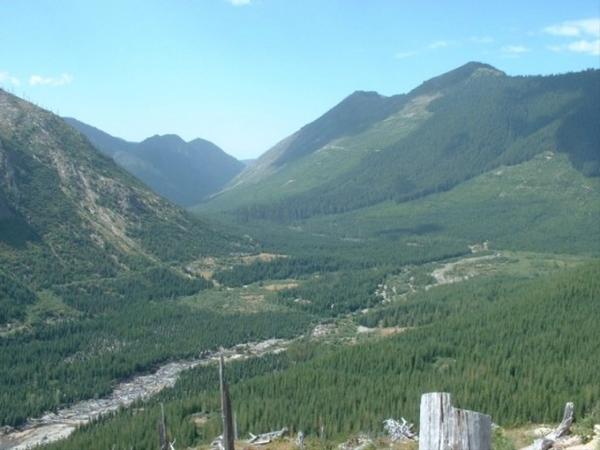 The U.S. Forest Service is moving forward with a plan to allow exploratory mining near Mount St. Helens.
The agency issued a draft decision approving Canadian company Ascot Resources Ltd.’s plans to drill for copper and gold in Washington’s Gifford Pinchot National Forest.
The decision opens a 45-day period for the public to object to the U.S. Forest Service’s draft decision.
Cowlitz Valley District Ranger Gar Abbas acknowledged in the report that “there is a great deal of concern that this decision somehow makes the potential for future approval of a new mine in this area easier or more likely.”
Abbas went on to stress the permit is not for mining, but for exploratory drilling. If Ascot decides there are enough resources to make it financially viable to open a mine, they would have to go through an additional permitting process.
The area in question is about 900 acres of forestland 12 miles northeast of the Mount St. Helens crater. It sits just outside the Mount St. Helens National Volcanic Monument. A permit approval would allow Ascot to test drill at 63 sites within the Green River Valley near Goat Mountain.
“There is a lot at stake here,” said Matt Little, the executive director of the Cascade Forest Conservancy.
He and other environmentalists worry the prospecting could endanger Green River, a state designated gene bank for wild salmon. The river also flows downstream into the Toutle and Cowlitz River systems, a source of drinking water for communities like Kelso and Longview.
“This river valley is so special to so many people,” Little explained. “Not only is it the source of drinking water for many communities, but it’s the source of life for so many species, from wild steelhead to elk. A mine would completely destroy this.”
The area used to be owned by the Trust For Public Land, but was purchased by the Forest Service three decades ago with money from the Land and Water Conservation Fund.
“Everyone thought this area would be protected,” said Little. “And now we have a mine proposal.”
The Cascade Forest Conservancy said they have been fighting against drilling in the area for about a decade. A previous permit approval by the U.S. Forest Service in 2012 was vacated after a 2014 federal court decision. The court objected to the environmental assessment and ruled the Forest Service had not adequately addressed groundwater concerns and mitigation measures.
Ascot did not return calls for comment.
“This is an environmental fight we’ve been engaged in for going on several years,” said Steve Jones, a Camas resident and a member of the Clark-Skamania Flyfishers. He believes the prospecting will threaten the three species of endangered salmon that reside in Green River.
“It’s a real disappointment for us,” said Jones. “This river needs to be conserved, not exploited.”