[vc_row row_type=”row” use_row_as_full_screen_section=”no” type=”full_width” angled_section=”no” text_align=”left” background_image_as_pattern=”without_pattern” css_animation=””][vc_column width=”1/12″][/vc_column][vc_column width=”5/6″][vc_column_text]From old-growth forests to snow-covered alpine areas, Washington’s South Cascades are home to a variety of habitat types that support a wide array of plant and animal populations. Connectivity throughout the landscape allows wildlife to move between habitat areas, enabling populations to be more resilient to a changing climate. Cascade Forest Conservancy has identified some of the key areas in the Gifford Pinchot National Forest that, with increased protections, would improve and sustain the ability of wildlife populations to move between patches of habitat and be more resilient to climate change impacts. Increased protections for these areas could range from administrative action, which protects a few select ecosystem values, to designation under the Wilderness Act.
Although there are a variety of approaches for mitigating the impacts of climate change, there is one theme that runs throughout: protect land rapidly to buffer biodiversity against climate change. Climate change is already causing a shift in different forest types, and these impacts are likely to continue in future generations. For current habitat to persist as functional habitat in a changing landscape, reserves and protected areas should be expanded.
Protected areas provide a way to improve connectivity across the landscape by reducing road densities, eliminating some harmful human activities, and otherwise making key habitat areas and corridors available for wildlife. Climate change is impacting habitat by causing a shift in forest types and a decoupling of species relationships. Warmer, drier years are beginning to move forest types north and to higher elevations, and these impacts may be long-lasting on the landscape. Some wildlife populations will need to migrate to adapt to these changes. If there is not suitable habitat nearby, or it is not connected by a corridor of dispersal habitat, events such as a wildfire or drought could wipe out populations. By protecting key habitat areas in the forest through laws, regulations, and other designations, we can help ensure that they remain intact to benefit wildlife populations.
Key areas identified for increased protection in the Gifford Pinchot National Forest.

To identify priority areas for increased protection in this region, we first located roadless areas to determine where connectivity would be improved by maintaining large roadless areas and smaller connected ones. We also focused roadless areas because Inventoried Roadless Areas already receive some protections under the 2001 Roadless Rule and are good candidates for additional protection. Locating roadless areas on a map also helped to determine where remnant road segments could be removed to benefit connectivity across the landscape. Inventoried Roadless Areas (IRAs) are roadless areas greater than 5,000 acres that have been inventoried by the Forest Service during the Roadless Area Review and Evaluation (RARE) and other assessments. IRAs meet the minimum criteria for designation under the Wilderness Act and are managed in accordance with the 2001 Roadless Rule.
We also located uninventoried roadless areas, which are areas that are predominately roadless, but were not formally inventoried by the Forest Service. Remnant roads, or roads that are closed but still on the Forest Service road system, remain in some uninventoried roadless areas. These remnant roads and roads that lie between two potentially conjoining roadless areas are top priorities for road reduction. To understand where roadless areas exist in relation to habitat core areas and connectivity corridors, we overlaid maps of connectivity corridors on roadless maps. This helps us determine where to focus our climate adaptation efforts to strengthen roadless values and decrease fragmentation.
Based on these maps, and the need for reserves of different habitat types, we identified the following areas as key places for increased protections in the Gifford Pinchot National Forest. Some of these areas are suitable for designation under the Wilderness Act, but others may be more suited to being protected administratively such as through special area designation or forest plan amendments.

(1) Trapper Creek Wilderness Addition
The “Bourbon Creek” addition to the north side of the Trapper Creek Wilderness contains healthy stands of old-growth forest, and it is currently part of an Inventoried Roadless Area. This Wilderness expansion would provide an important enlargement of contiguous habitat in the southern Gifford Pinchot National Forest and an additional buffer to the surrounding mix of forest lands subject to timber harvest, encroaching forest edges, and roads. Also, there is a lack of Wilderness areas in the GPNF that are easily accessible from population centers. The Trapper Creek Wilderness is a popular location for day-use backcountry recreation, and expansion will enhance those opportunities while also making more habitat available for wildlife. Wildlife camera surveys have shown this area to be well-used by a diverse set of animals and considering the nearby pressures of urban expansion, logging, and habitat shifts, there is good reason to formally establish protection for this area. 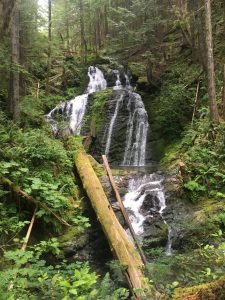 (2) Siouxon Creek
The Siouxon Creek area is home beautiful waterfalls and patches of old-growth forest closely intermingled with post-fire habitat created by the many great fires that swept through this area in the early 1900s. These unique features make this area important habitat for many different wildlife populations. Siouxon Creek is also a popular recreation area, and recreation in this area is likely to increase as the nearby population centers in Southwest Washington continue to grow. This important connectivity corridor and popular recreation area would benefit from formal administrative or legislative designation to protect habitat values.
(3) Dark Divide
This iconic roadless area is drenched with more lore and wonder than any other part of the Cascades. This area is thought to be home to Bigfoot, and it was once considered to be the likely landing site of D.B. Cooper, who parachuted from a plane in 1971 with bags of stolen money. Not only is the Dark Divide a landscape of legends, it is also highly important as a habitat reserve for its contiguous old-growth forest stands. Unfortunately, the Dark Divide has been filled with the loud and damaging footprint of off-road vehicles (ORVs). Due to the noise and large ruts created by ORVs, terrestrial and aquatic habitat quality has decreased along with the opportunity for backcountry hiking and camping. The Dark Divide has yet to gain a level of increased protection despite its high value as a large reserve of roadless old growth habitat.
These three areas are a subset of the key areas we have identified for increased protection in the GPNF. A large network of protected areas in Washington’s South Cascades is a long-term goal that will involve partnerships, citizen involvement, and various conservation approaches. Designation of these areas requires working on several levels to increase our understanding of needs and optimal routes for building climate resilience in these forest ecosystems. Many of our on-the-ground efforts will be carried out at the local, ranger district, and regional levels. However, it is also important to continue to advocate for strong national policies as many GPNF projects will be implemented based on national policy. Public involvement in these efforts will be critical. We encourage citizens to write, call, or meet with their congressional representatives and Forest Service officials to advocate for the protection of key natural areas. To learn more about these efforts and CFC’s other strategies to promote climate resiliency in the GPNF, check out our Wildlife and Climate Resilience Guidebook, which can be found by clicking [here][/vc_column_text][/vc_column][vc_column width=”1/12″][/vc_column][/vc_row]