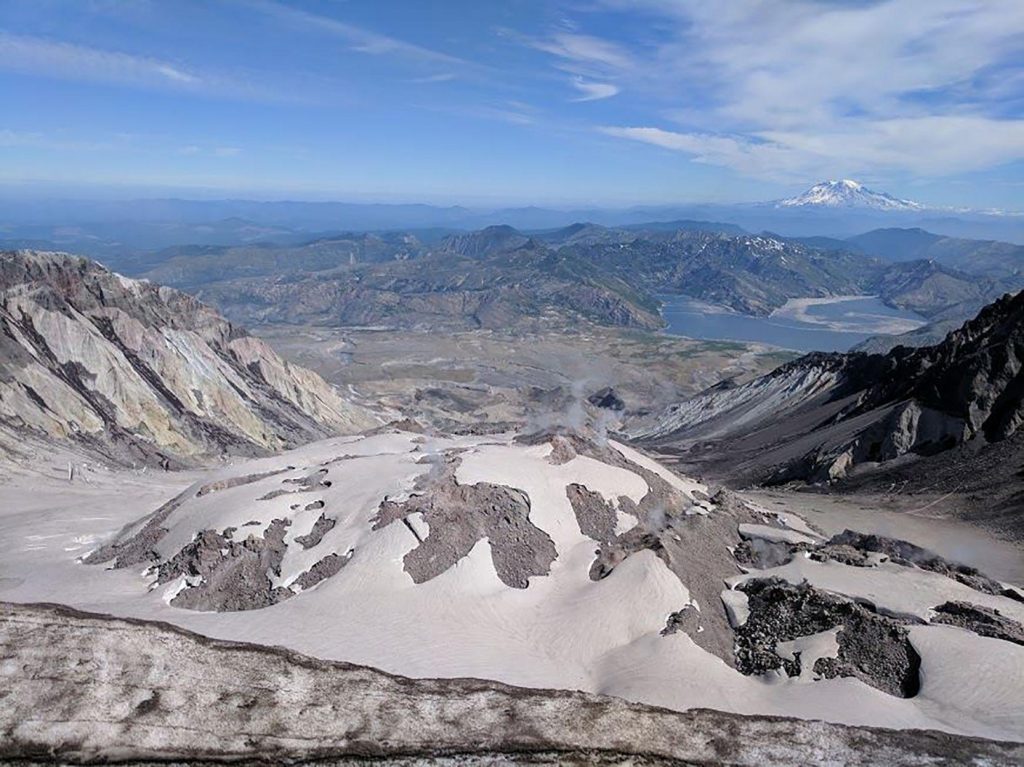 The Pumice Plain on Mount St. Helens is one of the most unique places on Earth, a 6 square mile landscape that was buried in ash during the mountain’s 1980 eruption, where almost no trace of human influence remains.

For that reason, it’s proved fertile ground for scientists, where researchers of many disciplines have spent the nearly four decades since the eruption literally watching nature run its course. The formation of streams, the return of plants and animals all are the subject of ongoing studies in this singular environment. Currently, 33 active research studies are taking place on the Pumice Plain.

“It can’t be overstated just how useful having something like this is,” said Dr. Jim Gawel, associate professor at the University of Washington, Tacoma.
Gawel has been conducting research at the Mount St. Helens National Volcanic Monument since 2008, studying how changes in the surrounding landscape affect productivity at Spirit Lake, looking at things like nitrogen and phosphorus cycles. Those changes and their subsequent effects have all been wholly natural — but maybe not for long.
The U.S. Forest Service has proposed building a road through the Pumice Plain, an area where even hikers are directed not to step off the trail. Late last year, the agency released a Finding of No Significant Impact, clearing the project for the next phase of the environmental review process.

The road — which is slated to run just less than three miles — would serve a serious purpose. It’s designed to allow access to the Spirit Lake Tunnel, which was built to help drain the lake after its natural outflow was blocked by debris from the eruption. If the tunnel were to fail, lake levels could rise and breach the debris barrier, causing catastrophic flooding all the way to Interstate 5.

For decades, transportation to the tunnel has generally been conducted with helicopters, flying in workers to do inspection and maintenance. The proposed road would allow off-road utility vehicles to get to the lake, making access much easier. The project also includes the drilling of core samples to study the composition and stability of the debris blockage.
The decision notice issued by Monument Ranger Rebecca Hoffman noted that 50,000 people live in the projected inundation area of a Spirit Lake flood, and overdue maintenance on the tunnel is already on the order of tens of millions of dollars. Though the document acknowledges the road could affect some of the science taking place on the Pumice Plain, it says that public safety takes precedent.

Though scientists and conservationists acknowledge public safety is important, they’re skeptical that building a road is the urgent matter the Forest Service is making it out to be.“They’re triggering this emergency clause that allows them to fast-track things,” said Matt Little, executive director of the Cascade Forest Conservancy. “We also want to address the safety concerns, but we also don’t think the solution should be literally bulldozed through the Pumice Plain in the most sensitive research area of Mount St. Helens with incomplete review. They haven’t shown us that there’s any emergency at this point.”