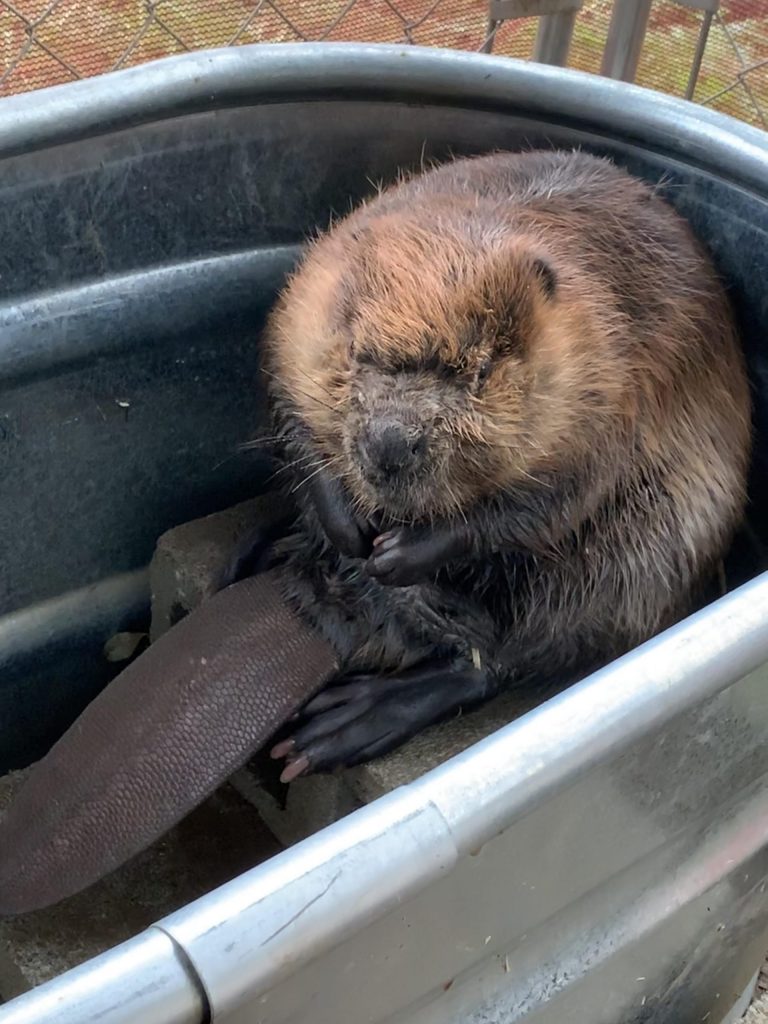 Cascade Forest Conservancy is working to restore beavers to areas of the forests where they are absent. European settlement and the fur trade that fueled it reduced beaver populations to as few as 100,000 animals by the turn of the 20th century. In the last 100 years, their numbers have rebounded significantly, but are still only a fraction of historic levels. Many plants and animals in North America evolved in a world shaped and constructed by beavers. These rodents, and the habitats they create, are still essential to healthy watersheds and forests.

Reintroducing beavers is one of our best tools for protecting and restoring ecosystems across southwest Washington. This year, we’ll be moving 3-4 families of beavers from areas where their penchant for building is impacting human infrastructure to places in the wild where they are most needed.

Early last week, we got the call that our wildlife trappers caught our first beaver of the season! We met the trapper at our beaver housing facility and learned that we had a 2-year-old, 29 pound male. We were informed that he definitely had a mate or sibling that we would need to get before we released them into their new home in the Gifford Pinchot National Forest.

Trapping beavers takes experience and knowledge, which is why we are working with licensed trappers. The trappers position the trap so it is partially in the water and place vegetation and castor lure to attract the beavers. Once one beaver is trapped, the other beavers are quick to become skeptical of the traps near their home. It is not uncommon for them to retreat for a couple of days after traps are set. The photo below shows the 2-year-old male beaver in the box trap he was caught in.

Two days later, the trappers had news that they caught the 2-year-old, 24 pound female beaver that was living with the male beaver. The female was quick to hide when we put her in the facility and the male immediately went over to her. She stayed tucked away and the male went and sat next to her. It was a clear sign that they remembered one another and that we should leave them be! The next afternoon we found the snuggled together in their lodge. As we began to clean the housing facility, they jumped into one of their pools while we were cleaning it out. It was safe to say that they seemed happy to be reunited with one another!

The trappers were pretty confident that these two beavers were the only ones living together, but they kept the traps out for a few more days before we made the call on releasing them to their new home. We are only allowed to house the beavers for two weeks so we don’t leave too much of an imprint on them from human interactions. We had the male for 5 days and the female for three, so we thought it was worth it to wait and see if they had anyone else in their family. So, the beavers hung out for a few more days doing beaver activities like swimming, grooming, sleeping, and eating.

After a week in the facility, the beavers could now get back to being wild beavers. In their previous home, they were negatively impacting infrastructure that was near their creek. Now, in the national forest, they can construct their dams and lodges where there is minimal risk of damaging any infrastructure. Ideally, the beavers will stay where they were released but no matter where they go, they will provide the ecosystem with numerous benefits like creating in-stream habitat for a variety of species, stabilizing seasonal flows, capturing fine sediment, and recruiting riparian vegetation.

In addition to the wildlife camera, this pair of beavers were also outfitted with radio transmitters for a study being conducted by WSU-Vancouver and WA Dept. of Fish and Wildlife. We will be able to get daily locations about where these beavers are moving within the system. A graduate student with WSU-Vancouver is currently out tracking the movement of our newly released beaver pair. Over the first few days the beavers have up and downstream from the release location but have stayed within a half a mile of the release. The radio transmitter tracking will occur for two weeks and then two weeks after that CFC will go out to look for dams, lodges, and other signs that the beavers have decided to make this spot their new home!

PrevPreviousWHY ARE FIRES IN THE PACIFIC NORTHWEST GETTING WORSE?
NextBeaver Reintroduction Update IINext