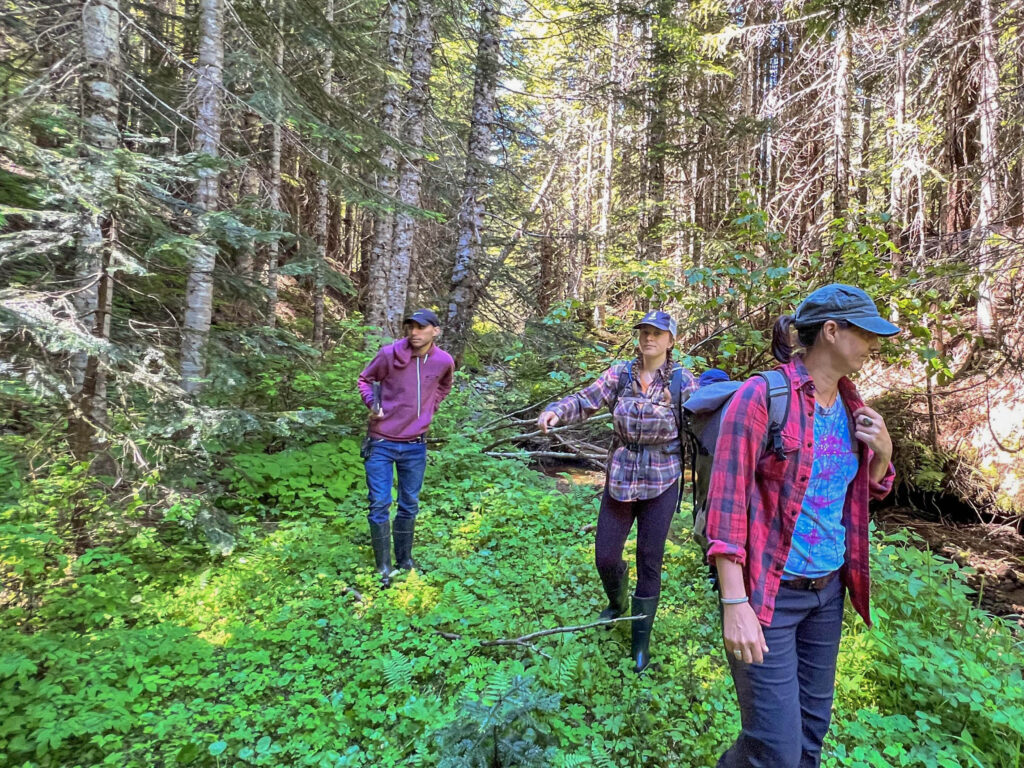 Two weeks ago, I participated in my first project in the field with CFC staff and volunteers in the Gifford Pinchot National Forest. Beavers were previously introduced to specific sites, and our goal was to revisit these locations to identify any signs of beaver habitation and survival. As a native southside Chicagoan who has never visited the Pacific Northwest, I was thrilled to begin this new experience while exploring and camping in the woods. Day one started with friendly volunteers meeting each other and sorting into four groups. Each group had a designated path to a meadow, described by Amanda (CFC’s Science and Stewardship Manager) as a serene landscape that would be worth our journey. With an iPad to navigate in hand, tools for removing invasive species we happened to come across, oversized boots, and a few squished sandwiches in my backpack, I eagerly followed my group into the woods for a new adventure. 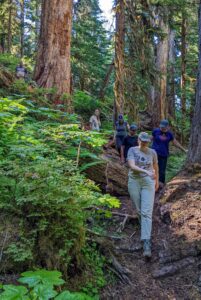 Leading up to this weekend trip, I pictured myself hiking on clear trails. Those expectations were quickly dashed after beginning our trek, for the woods were much denser than our group anticipated. I embraced the challenge of intense bushwacking, though, and powered through a series of branches and shrubs with my group for the sake of beaver evidence. We found a few gnawed sticks with teeth marks and proceeded to photograph them and map our locations. I found a few sticks myself, but they were just beetle larvae patterns carved into the wood. We continued our journey throughout the day, wading through the river and gazing at amazingly tall trees, only to ultimately decide to turn back in fear of not returning in time. 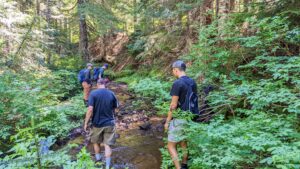 Unfortunately, my group and two others did not reach the beautifully acclaimed meadows, though I may still get a chance to see it if we return to release beaver later in the summer. Although we never reached our destination, I enjoyed the trek very much. My group spent the remaining time identifying and removing invasive species in a nearby parking lot until the other groups returned, ensuring their seeds couldn’t spread to other areas of the forest by attaching to hikers, pets, or vehicles. I didn’t even need to use my handy plant identification app, Seek, because my group members were incredibly skilled in determining all plant species within seconds of looking at one. I aspire to be at their expertise one day.

We visited a secret waterfall before heading to our campsite. It was absolutely magnificent- a rainbow shined at the bottom of the falls over glistening mossy rocks. The cliffside was full of beautiful cascades and Douglas firs at various levels. Since this was my first waterfall, my expectations are now unrealistically high, as I’m sure I will never achieve such a state of awe again. When we arrived at our campsite afterward, we all quickly set up our tents and began cooking elaborate dinners. Well, the volunteers did. I struggled to set up my tent, even with Amanda’s help, then savored a delicious meal of smushed berries and my last sandwich. The entire group continued for a few hours, laughing and talking around the campfire, others visiting a nearby lake. I, however, promptly fell asleep from pure exhaustion. 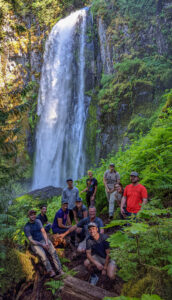 Day two of our adventure placed us near a set of frog ponds southwest of Mount St. Helens. Since this area was reasonably open compared to yesterday, all participants ventured together naturally because we could see one another no matter where we roamed. While searching for beaver evidence, volunteers clustered around a fallen tree that looked like a potential living space for beaver. Smaller ponds and channels surrounded the fallen tree, but nothing too deep that my oversized boots could not handle. I noticed a log slightly concealed by grass that offered itself as a shortcut to the rest of the volunteers. With only shallow creeks and channels resting nearby, I assumed there was no risk and began walking across the log. Having traveled across multiple logs the day before, I had practically become an overnight professional in hiking with supreme balance. 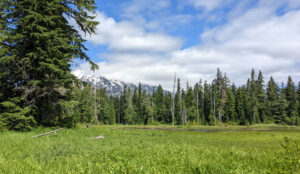 I was a fool whose enthusiasm had led me to commit a grave mistake. Within two seconds of stepping of walking, I slipped and fell straight into a hidden pond, submerging my body to my hips. Luckily I had stashed my iPad and phone in my backpack moments before, so all was not lost. The CFC staff said this was a rite of passage; my soaked pants begged to differ. I shuffled around in damp clothes for the rest of the day, but my spirit remained unbroken. We found some older signs of beaver that indicated their presence this past winter, but nothing extremely recent. We dedicated the rest of our day traversing down a creek, a fun excursion that led us down a winding stream with several spots for possible future beaver relocations. 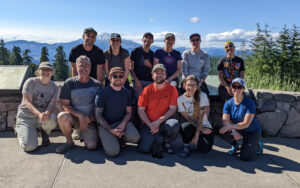 As the trip wrapped up and we returned from the ponds, I said my goodbyes to my new friends and thanked those who let me dry my wet clothes on the hoods of their cars. I felt very happy to have contributed to fieldwork that will inform future beaver reintroduction locations and practices in upcoming years. Overall, I loved spending my weekend in the Gifford Pinchot National Forest with CFC, and I look forward to creating many more memories on future trips throughout the summer.