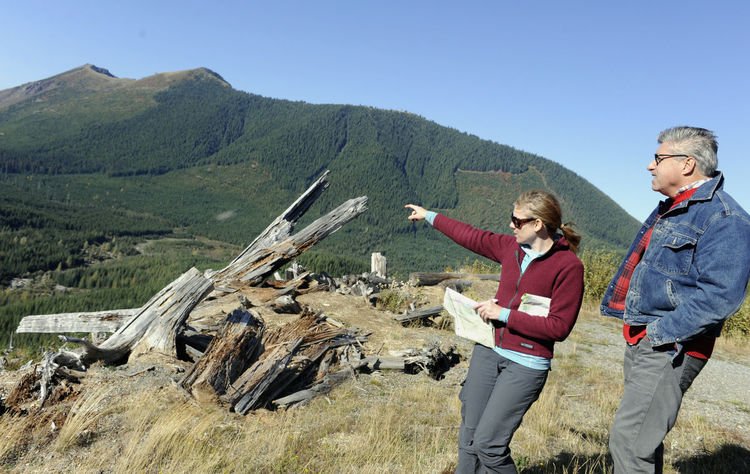 The U.S. Forest Service Tuesday tentatively approved a plan by a Canadian company to do exploratory drilling for minerals north of Mount St. Helens.
The move, which is bound to enrage environmentalists, would allow Ascot USA Inc. to test drill at 63 roadside sites within a 900-acre area in the Green River watershed near Goat Mountain in the Gifford Pinchot National Forest. The area is within the Mount St. Helens blast zone and just outside the northern border of the 110,000-acre Mount St. Helens National Volcanic Monument.
The public has 45 days to comment or object to the plan.
Approval of exploratory drilling is not an approval to undertake mining itself. If Ascot wants to proceed with a mine, it would have to file a separate application and undergo a separate, and likely far more rigorous, public review process through the Forest Service, which manages the area.
Ascot has not announced what type of mine it would develop, though opponents widely believe it would be an open pit mine.
To obtain permission to mine, Ascot would have to prove that the mineral deposits are available in commercially-viable amounts. That could be problematic. Small-scale mining has taken place in the area periodically for more than a century, and during the last 30 years, mining interests have tried and failed to kick-start mining efforts on the 900 acres. They all ran into the same problem: It just didn’t pay to mine on Goat Mountain.
In fact, in a little-noticed 1993 legal decision, the U.S. Bureau of Land Management denied a prospecting company, Vanderbilt Gold Corp., permission to explore the claim after an agency review found mineral concentrations too low to be profitable. The BLM review concluded that a mine in that area would lose nearly $200 million over its life.
Conservationists have opposed any kind of exploration. They say the area in question was purchased with funds specifically meant to conserve lands and that mining could pollute the Green River and compromise the volcanic monument, which was set up for scientific research and to preserve natural processes without human interference.
“We’re definitely opposed to (the draft decision). This land was purchased by the Forest Service for conservation and recreation purposes, not for mining. So we feel the Forest Service’s decision to even allow exploratory drilling is really contrary to the initial purpose of the purchase,” said Nicole Budine, spokeswoman Cascade Forest Conservancy (formerly Gifford Pinchot Task Force).
Even exploratory mining could damage steelhead habitat by increasing the temperature of the Green River and introducing mining additives and copper to the river, Budine said. The Green River feeds into the Toutle and Cowlitz Rivers, which supply drinking water to Kelso and Castle, although it’s not clear if exploratory mining would affect water quality, she said.
Cascade Forest Conservancy will be filing an objection to the Forest Service’s draft decision within the 45 days, Budine added.
Ascot officials could not be reached for comment.
Ascot has been attempting to get permission to drill for about a decade. A previous approval by the Forest Service in 2012 was thrown out in federal court in 2014. The proposal, according to the Forest Service, has been modified to meet with the court’s objections. The Forest Service said in its notice of decision that it conducted an entirely new environmental evaluation of the proposal and is taking measures to prevent drilling from damaging the land or water.
In its notice of decision, the Forest Service acknowledged that “It has become clear there is a great deal of concern that this decision somehow makes the potential for future approval of a new mine in this area easier or more likely. This consent decision is not for mining.”
It goes on to say that the test drilling that it will allow “is very similar to other investigative activities routinely authorized on National Forest Service lands in support of endeavors such as volcanic activity research, river side channel restoration, road construction and maintenance” and other activities.
The Forest Service says it will allow “approximately” 63 small-diameter (two-three inches) boreholes at 23 drill sites, affecting about a quarter acre of ground. Rock core samples would be collected and analyzed for the presence of copper and other minerals.

“It has become clear there is a great deal of concern that this decision somehow makes the potential for future approval of a new mine in this area easier or more likely.  This consent decision is not for mining.” U.S. Forest Service