On November 8th, I joined our project partners from Washington State University to check on a family of three beavers that we released in a tributary of the Lewis River earlier in the year. This was our last check of 2021.

On the morning of the trip, we were excited to find out that the forecast had changed. Instead of rain, it was going to be a cold but sunny day!  Typically, we can drive right up to the release site—a beautiful headwater pond with a view of Mt. St. Helen’s in the distance. As we rounded curves and gained elevation, we began to see some snow. At first, we weren’t concerned—it is not bizarre to see a couple inches of snow going into the mountains in early November. But as we made our way past a sno-park, that two inches of snow quickly grew to 4 inches and then to 8 inches. We no longer felt comfortable driving the SUV further up the road, but that wasn’t going to stop us from this final opportunity to check on this family of beavers.

We backtracked to the sno-park where we each confessed that we had not looked at the snow report. To reach the release site now meant we had to walk 5 miles in the snow. I was ill-equipped for this journey (I did not pack my snow boots for this trip), but we really needed to take environmental eDNA samples and place the wildlife camera. We all bundled up in the gear we had brought, and made our way to the snowy creek. 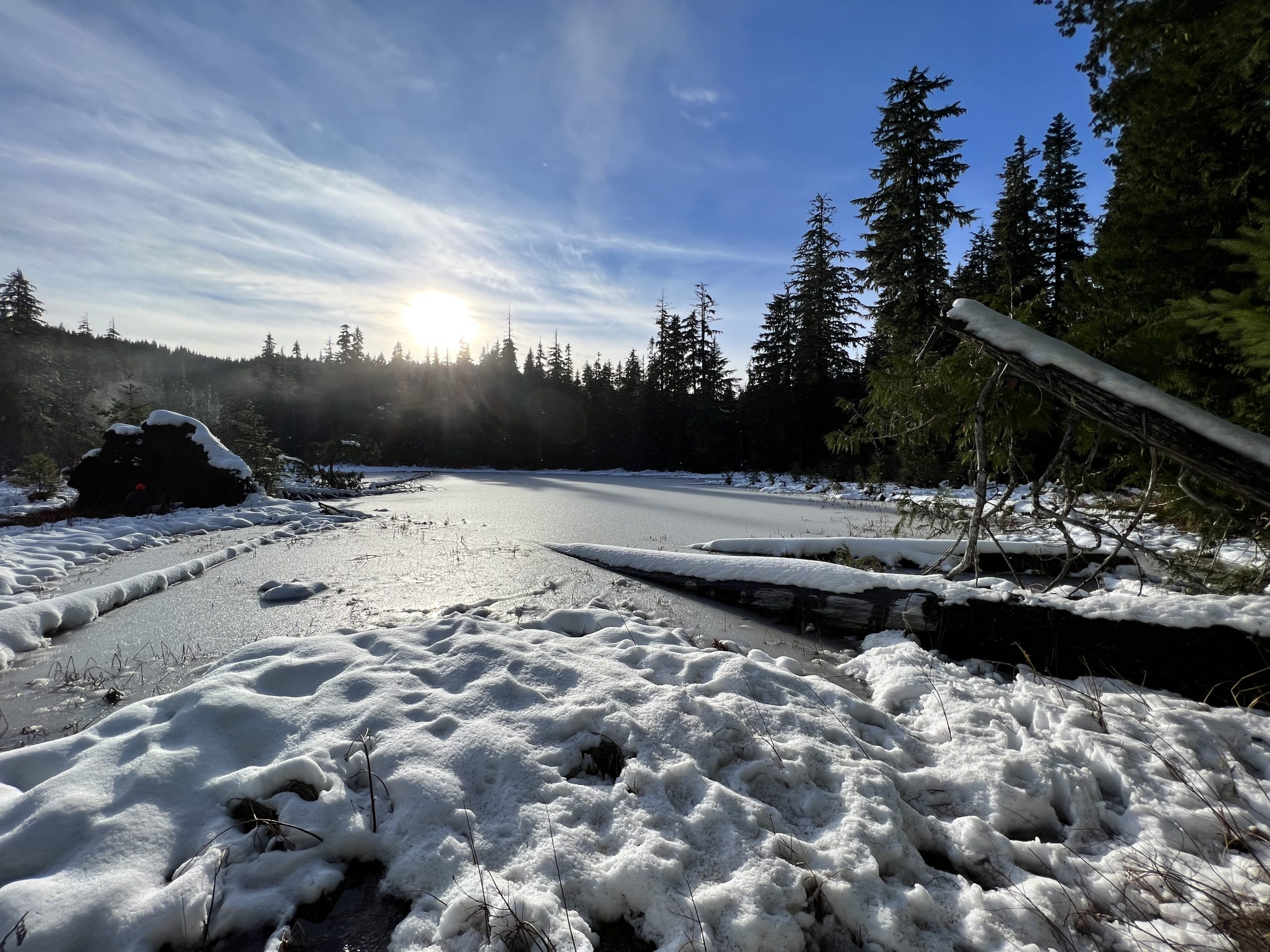 The beavers at this site had been released in the summer. We trapped them from a landowner’s property in Vancouver, WA. The beaver family had actually been causing damage for years; a culvert that was supposed to drain any excess water was completely underwater due to all of the dams that the beavers had created and maintained. The dams also caused flooding during parts of the year, blocking a county road that a neighbor needed to access their driveway. We believe in promoting solutions that enable people to live harmoniously with beavers. But in an urban environment, that isn’t always possible. The homeowner had a permit to notch the dams, but beavers will repair a dam overnight. For any substantial changes to be made to this overflowing wetland, the beavers were going to have to be removed. In a situation like this, relocation is the best option for the animals, which made it the perfect case for CFC to step in and move the family to the national forest where their construction work can be better appreciated confer beneficial effects to the surrounding areas.

We worked with a local wildlife conflict specialist and set traps near one of the dams, an area that we knew the beavers would be frequenting. We got one beaver only a few days after setting the traps, but then things began to slow down. It sometimes takes a bit of time to trap beavers, and we can only house them in our holding facility for two weeks. We decided to release the one that we had, hoping it would get its family members shortly after. Luckily that is exactly what happened! We were able to reunite the three family members at the release site in August. 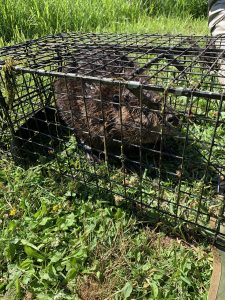 Right before the releases, we outfitted the beavers with radio transmitters, so our WSU partner, Jesse Burgher, could track them via radio telemetry. The transmitters each have their own frequency, so when Jesse is out with the antenna, he can triangulate the location of each beaver. Beaver #1 was released in late July and was tracked for a week straight. Jesse would get her location during the day and at night. On two occasions, he ended up very close to her. Once he saw her climb up rocks in the creek and another time she ended up walking straight towards him on land. Beavers don’t have great eyesight and Jesse was standing very still, so it’s likely that she didn’t notice him. In that week of observing, beaver #1 made multiple bank dens (burrows in the stream banks) and food caches about a mile down from the release site.

A couple of weeks later we released the rest of the family. Now all three beavers were being tracked via radio telemetry. Beaver # 2 decided to go off and explore soon after he was released, and we have not been able to track him since. Beavers are rather transient creatures and like to explore, especially in the summer and fall. Beaver #3, the youngest of the bunch, stayed right in the main pond where we had released him! Beavers become self-sufficient at a young age and this little one really proved that. For the next couple of months, beaver #1 and beaver #3 created even more food caches around the pond and downstream. Beaver #1 created a couple of more bank dens and beaver #3 took advantage of using a downed tree in the pond as refuge. Beaver #3 also repaired some holes in an old beaver dam near his downed log home.

By October, Beaver #3’s transmitter was found tangled in the grass so we assume it fell out and that he was not preyed upon. There was also an increase in activity after the transmitter was found, including tiny lodges, so it’s safe to say he is still there continuing to make his home. A few weeks after that, Beaver #1’s transmitter also fell out. We hypothesize that the increase in creating food caches for the winter likely leads to the transmitter being pulled out. They are moving through more trees, brush, and/or grass, so the transmitters are getting caught. Even when a transmitter falls off, we still have beneficial data about the beaver’s movements for the first few months. We can still rely on visual surveys of the area to look for beaver activity like food caches, fresh chew, beaver slides, dams, and lodges. We will revisit the site in January (with snow gear!) to conduct visual surveys and check our wildlife cameras. 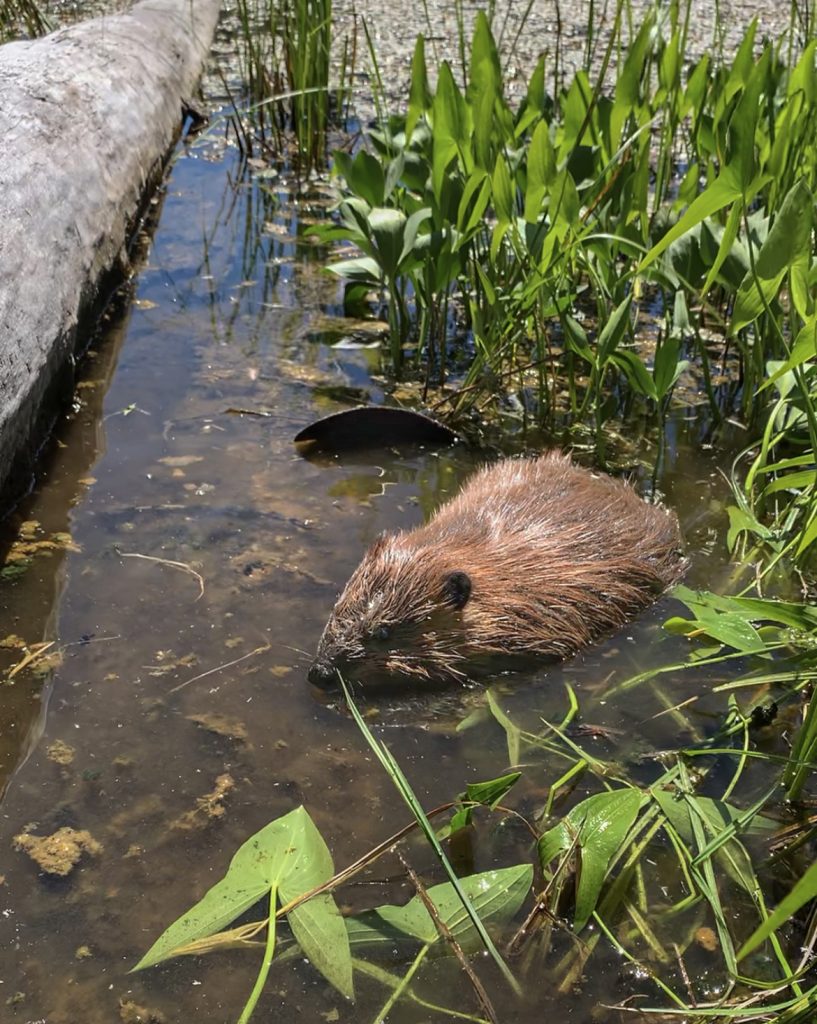